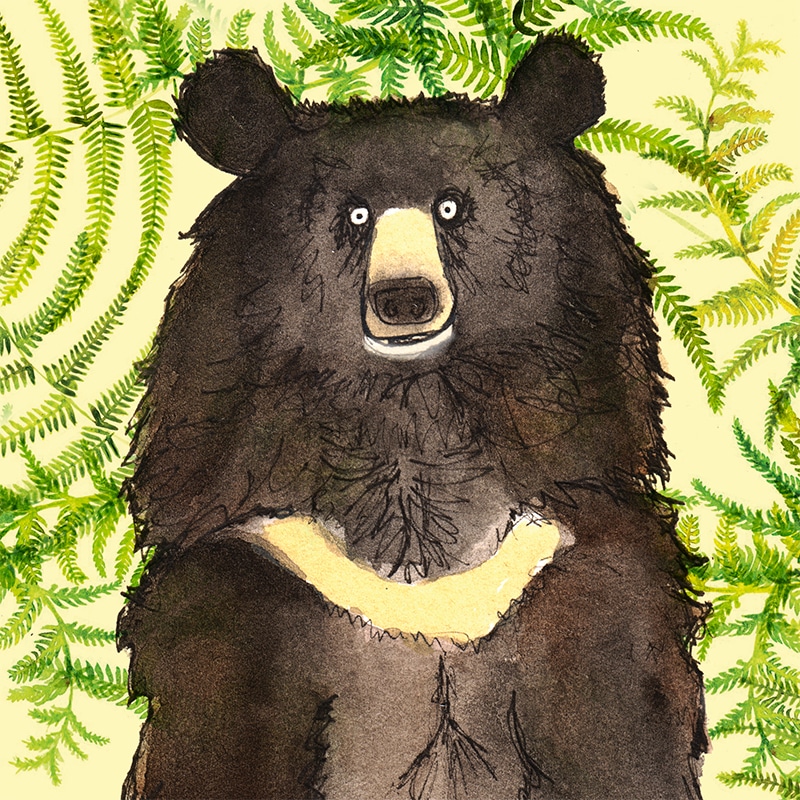 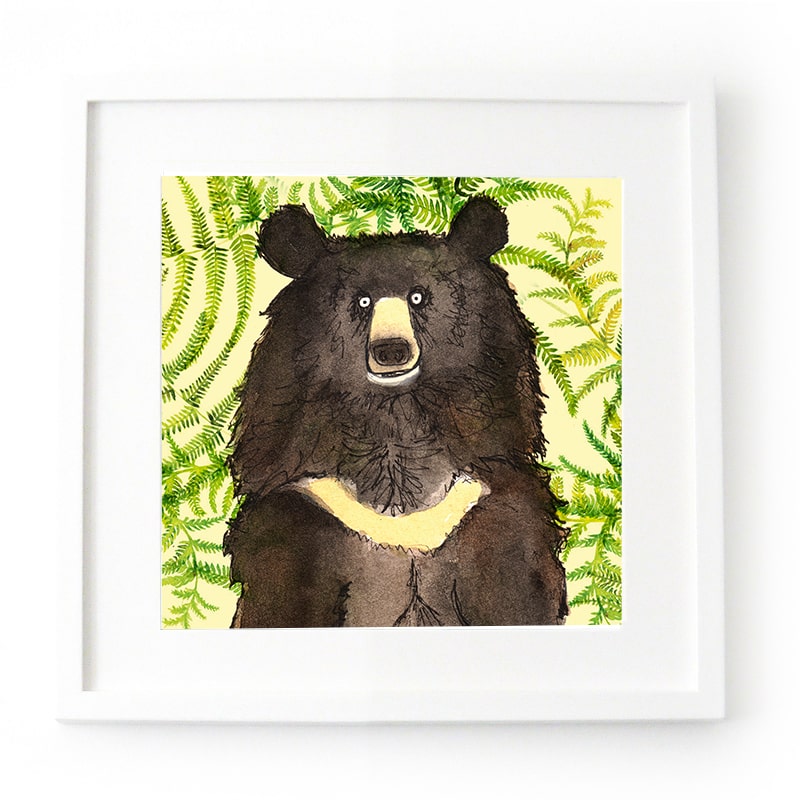 This is a giclee print of my original pen, ink and watercolour illustration of the Asiatic black bear

‘Sometimes called the ‘Moon Bear’ due to the crescent-shaped patch of pale yellow, cream or white fur on its chest, the Asiatic Black Bear also has a distinctive white chin. Standing on all fours, adults are typically 70-100cm tall and can reach lengths of up to 2m. With a slighter build than the Eurasian Brown Bear, males weigh up to 200kg and the smaller females 140kg. Seven subspecies have been identified, including the Indochinese Black Bear (Ursus thibetanus mupinensis).

Behaviour
Living largely solitary lives, Asiatic Black Bears are omnivorous, feeding on a mixture of leaves, bamboo shoot, fruits, nuts, insects and occasionally carrion, depending on the season and habitat conditions. They are particularly partial to fruits and are adept at climbing trees to reach them. Asiatic Black Bears only hibernate in the northern reaches of their range (Russia, Korea, Japan and northeastern China). Further south, where food is available year round and hibernation is not necessary, females still build birthing dens. Breeding usually takes place between June and July with up to four cubs born during November to March.

Habitat
In prehistoric times, Asiatic Black Bears were found as far west as present-day France. Although still widespread across Asia, the western limit of its range is now Iran, with a narrow band extending along the Himalayan foothills to Southeast Asia, northeastern China, Korea and the Russian Far East, overlapping with populations of Brown Bear, Sloth Bear and Sun Bear. Found predominantly in hilly or mountainous terrain, Asiatic Black Bears inhabit a variety of forest habitats, particularly where there’s a good supply of fruiting trees.

Threats and Conservation
The Asiatic Black Bear population is decreasing, with threats ranging from illegal hunting for its skin, paws, gall bladder and bile to human-bear conflict and deforestation due to logging, agriculture and urbanisation. Current conservation efforts tackle illegal hunting and the restoration and protection of forest habitat. Key to this is safeguarding areas of suitable habitat that are large enough to sustain the bears’ typical range of around 100 sq km.’
From WorldLandTrust.org

There are no reviews yet.

Be the first to review “Asiatic Black Bear