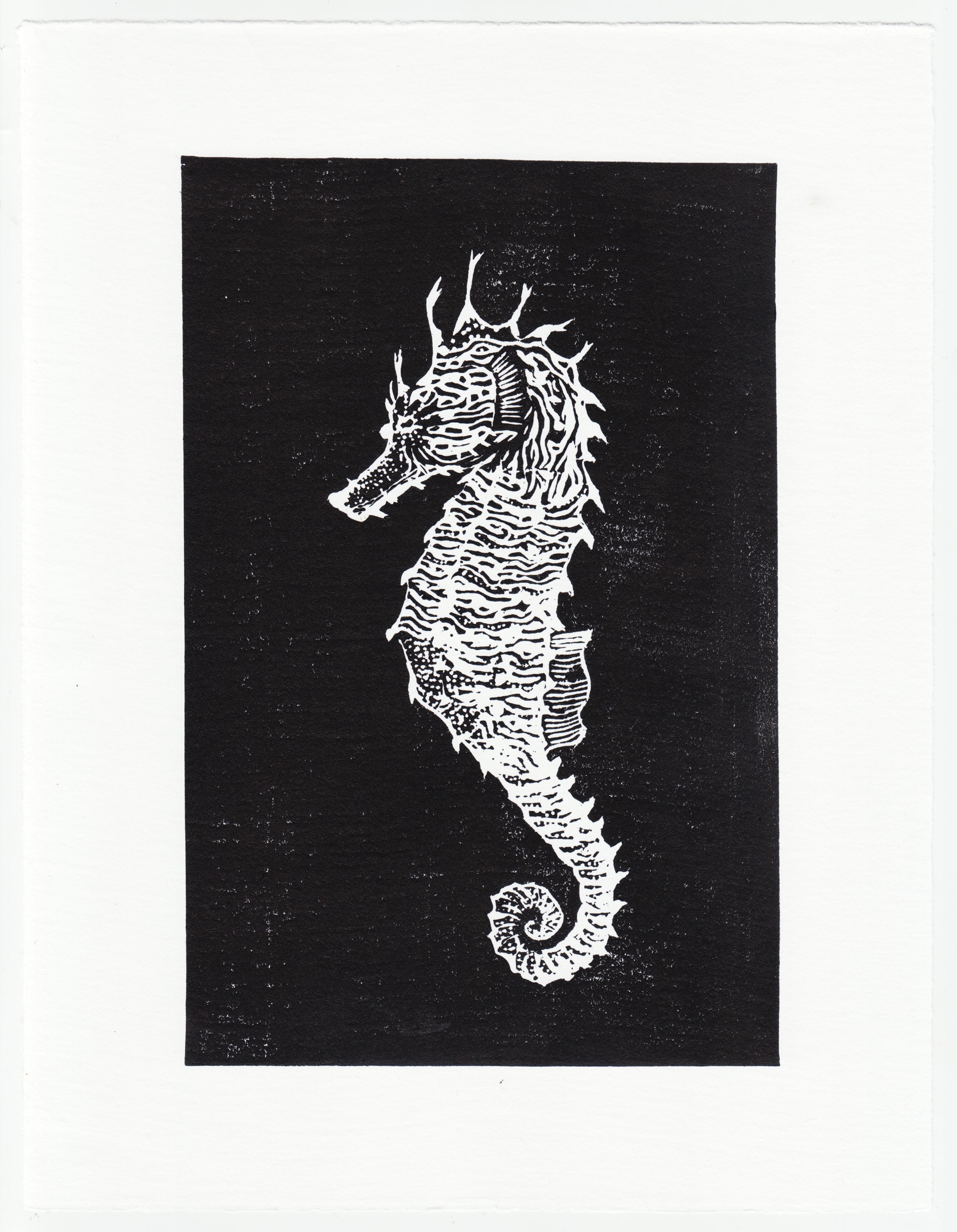 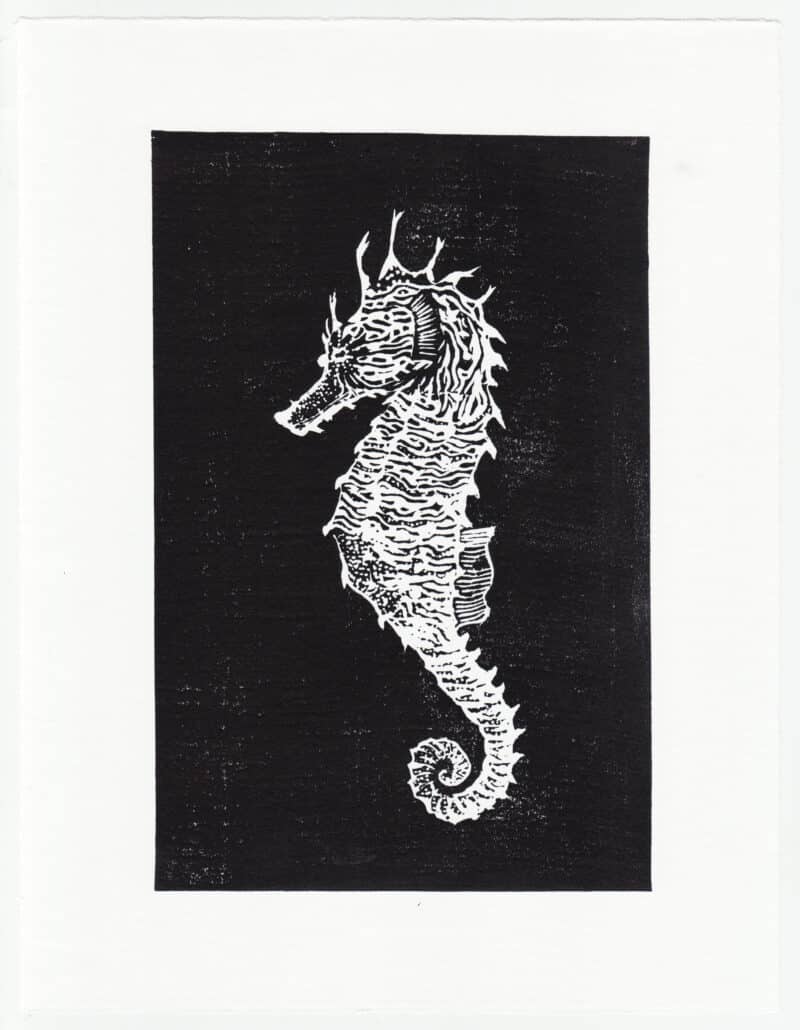 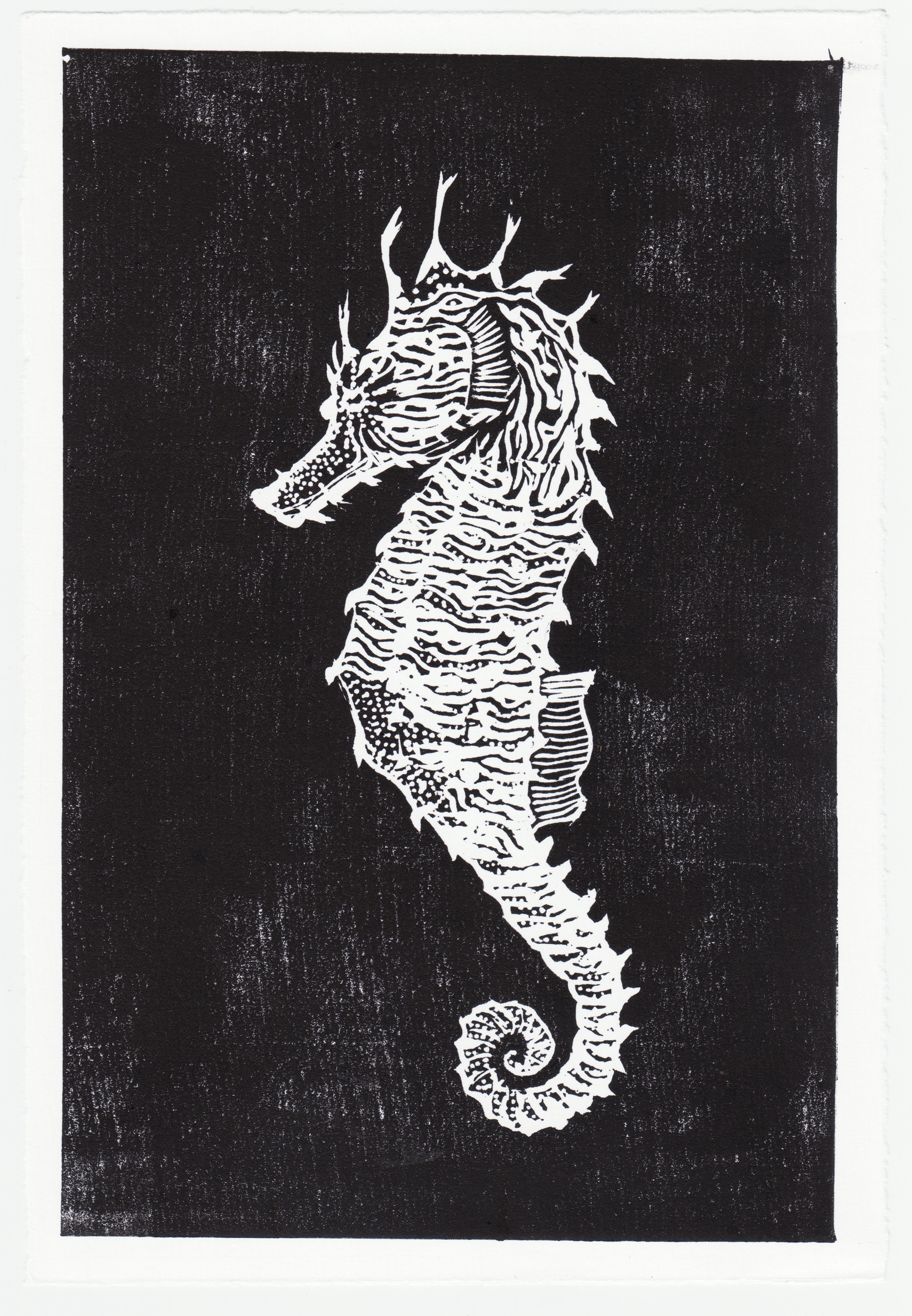 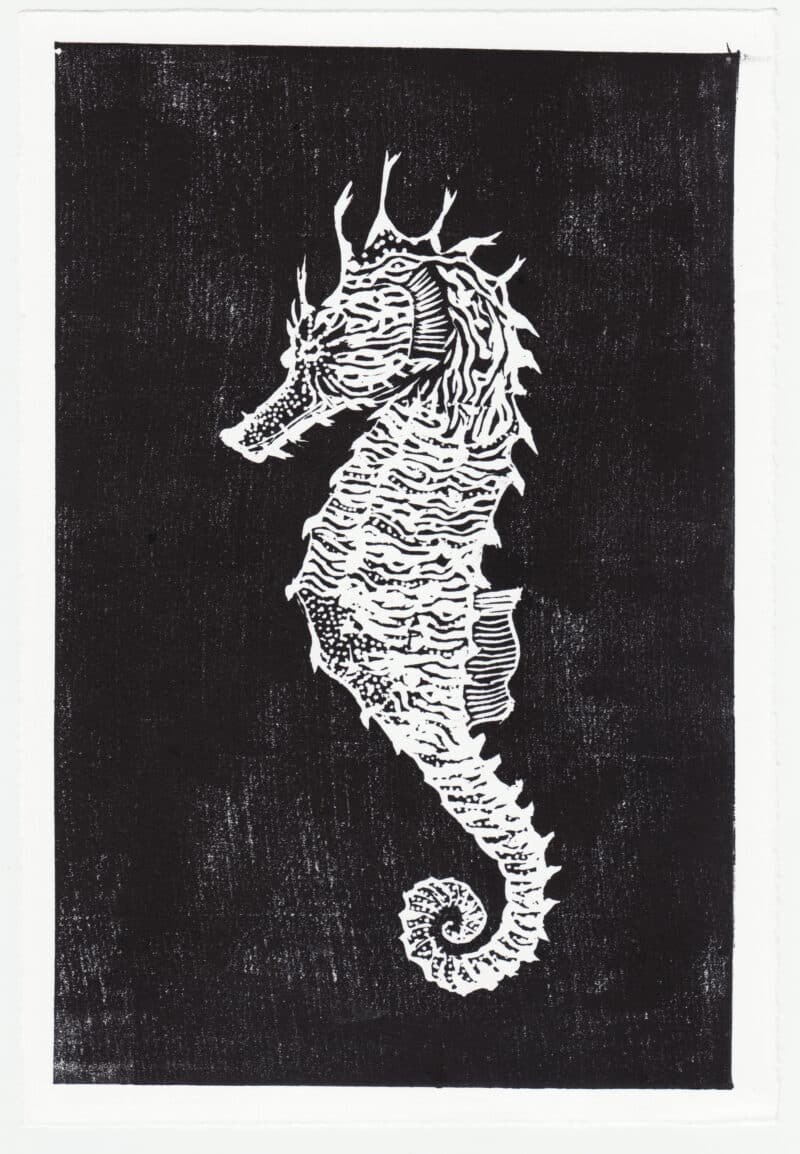 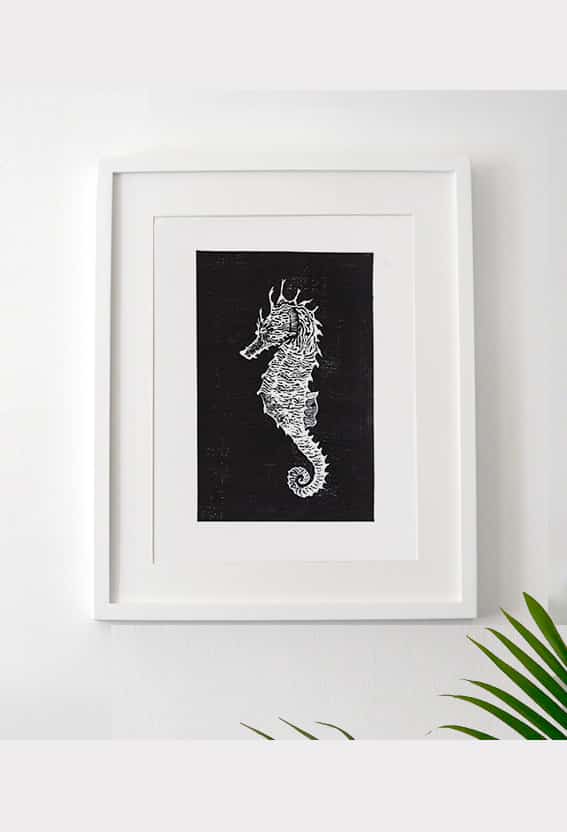 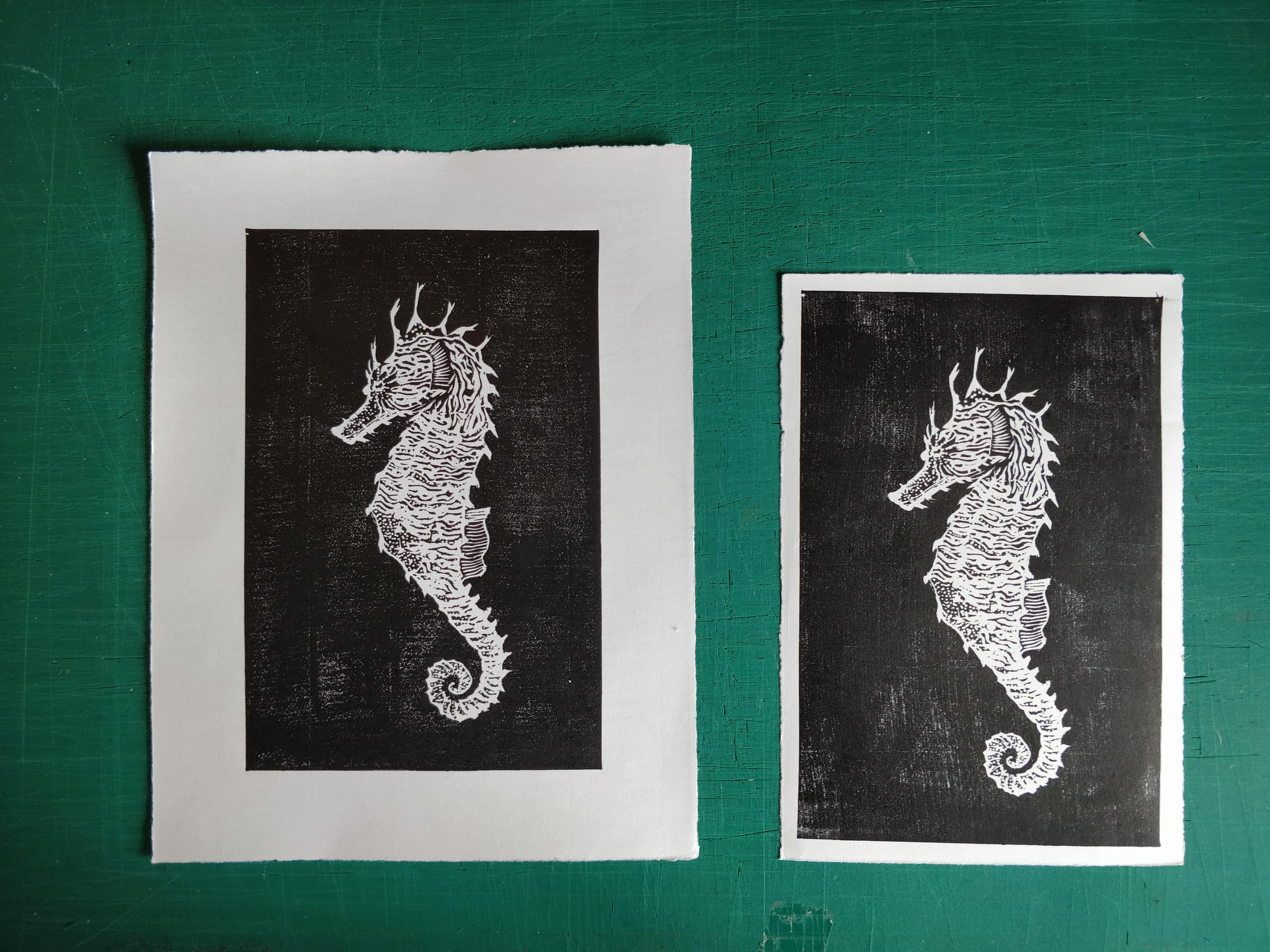 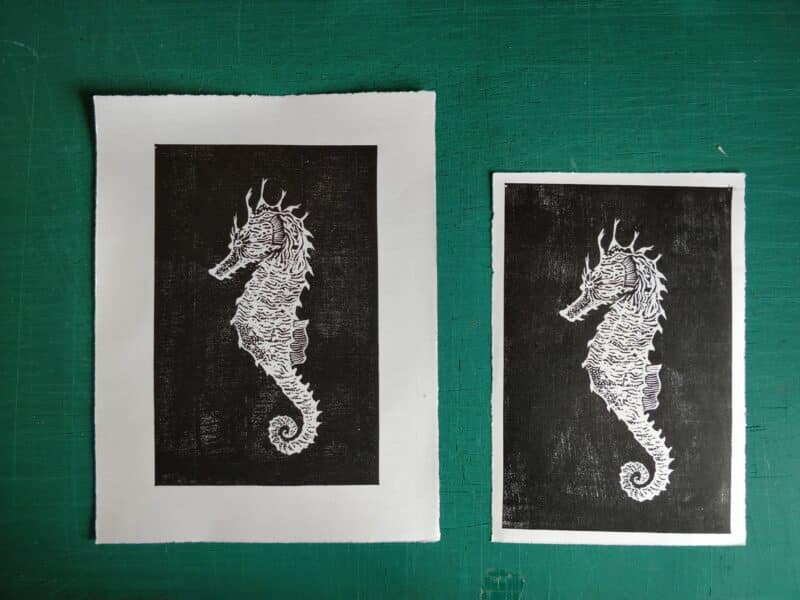 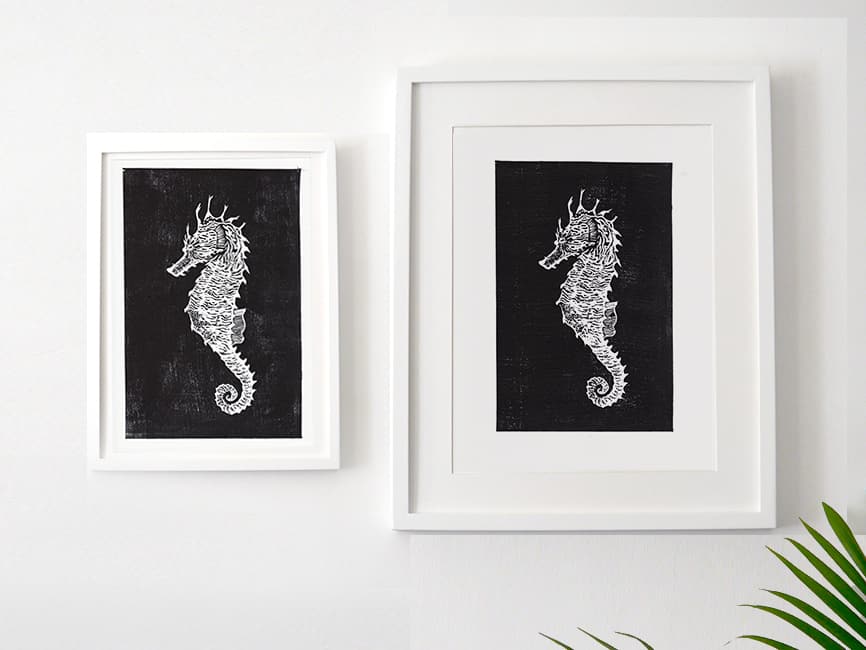 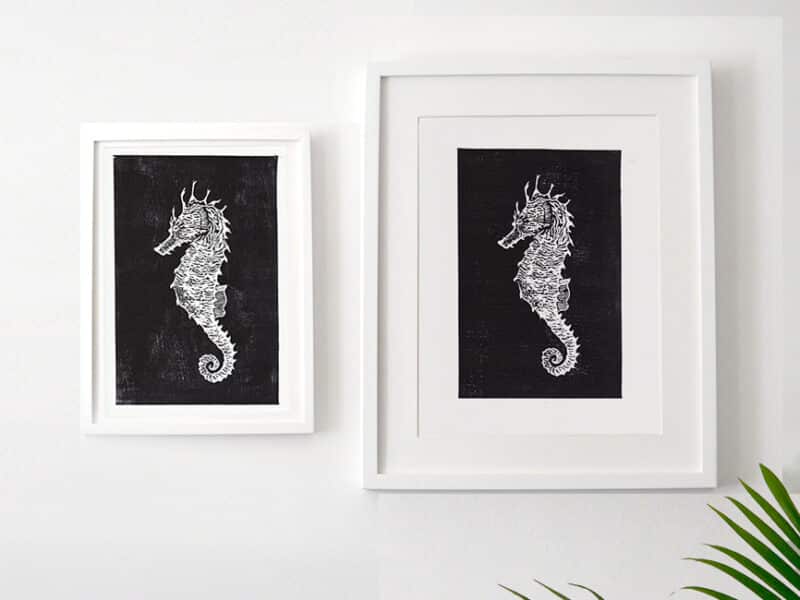 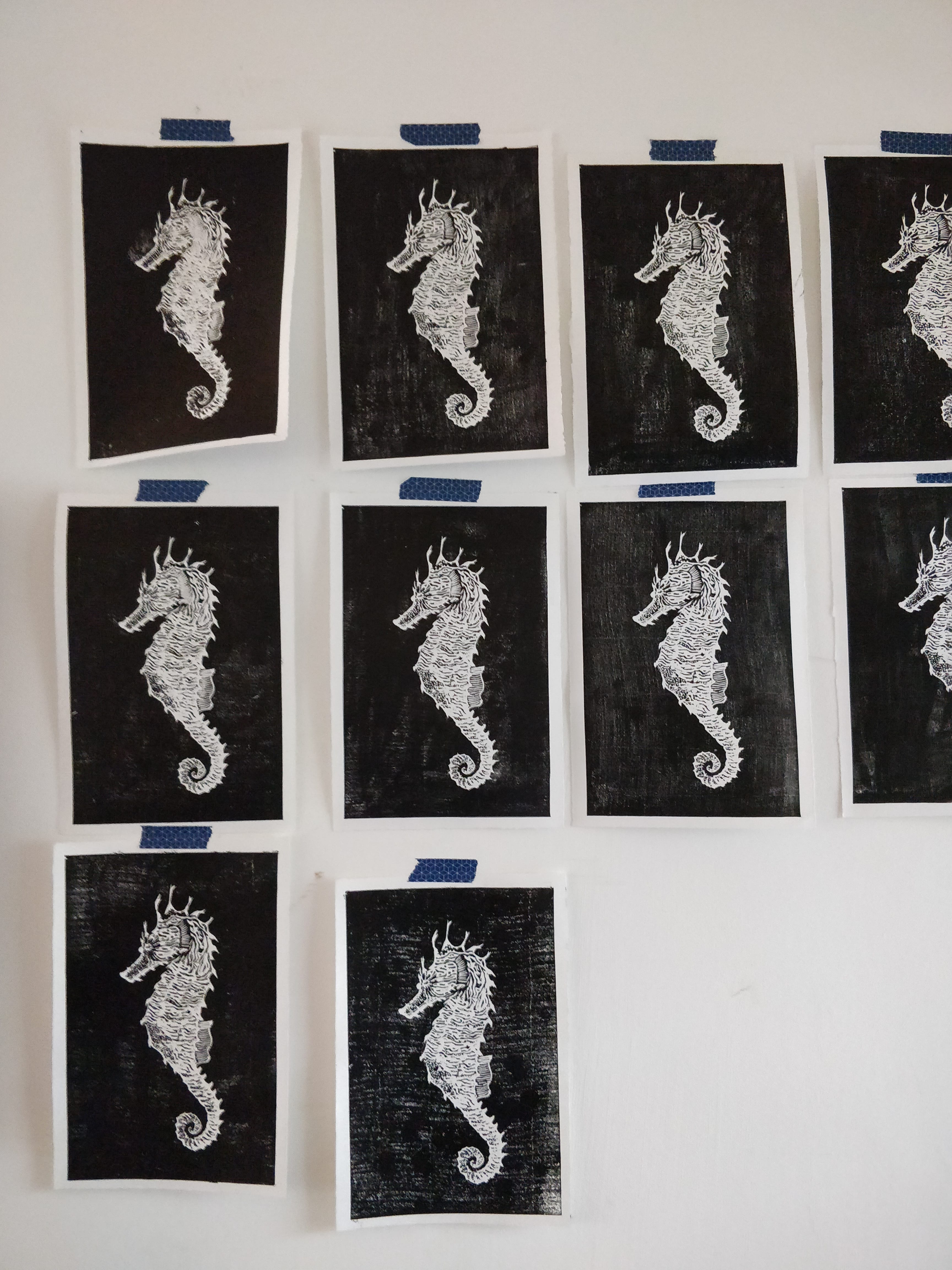 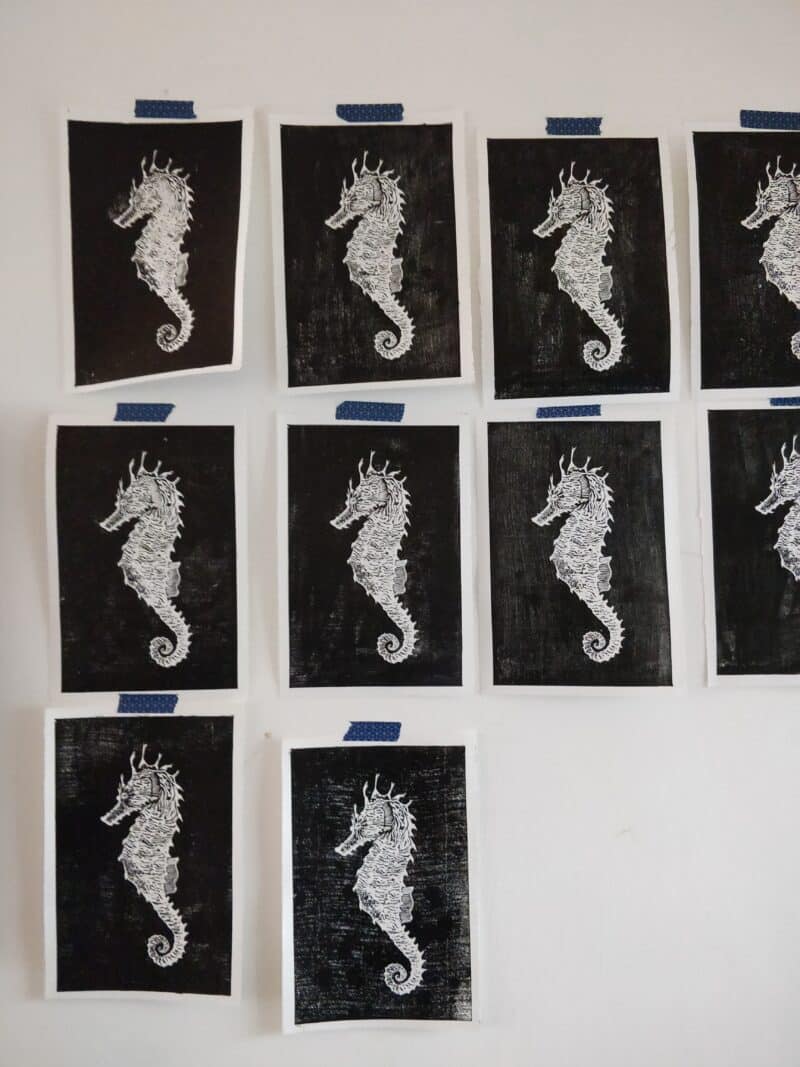 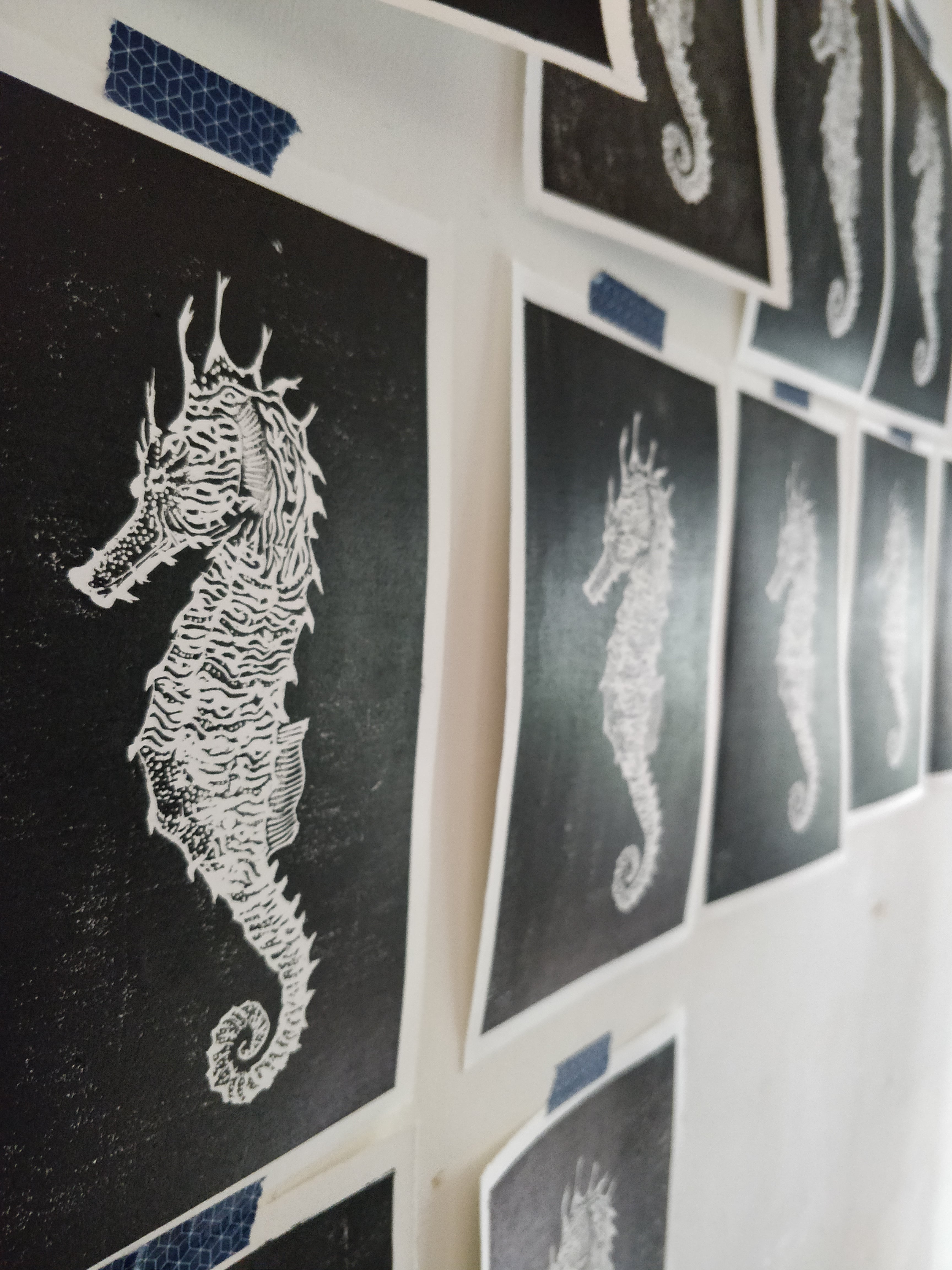 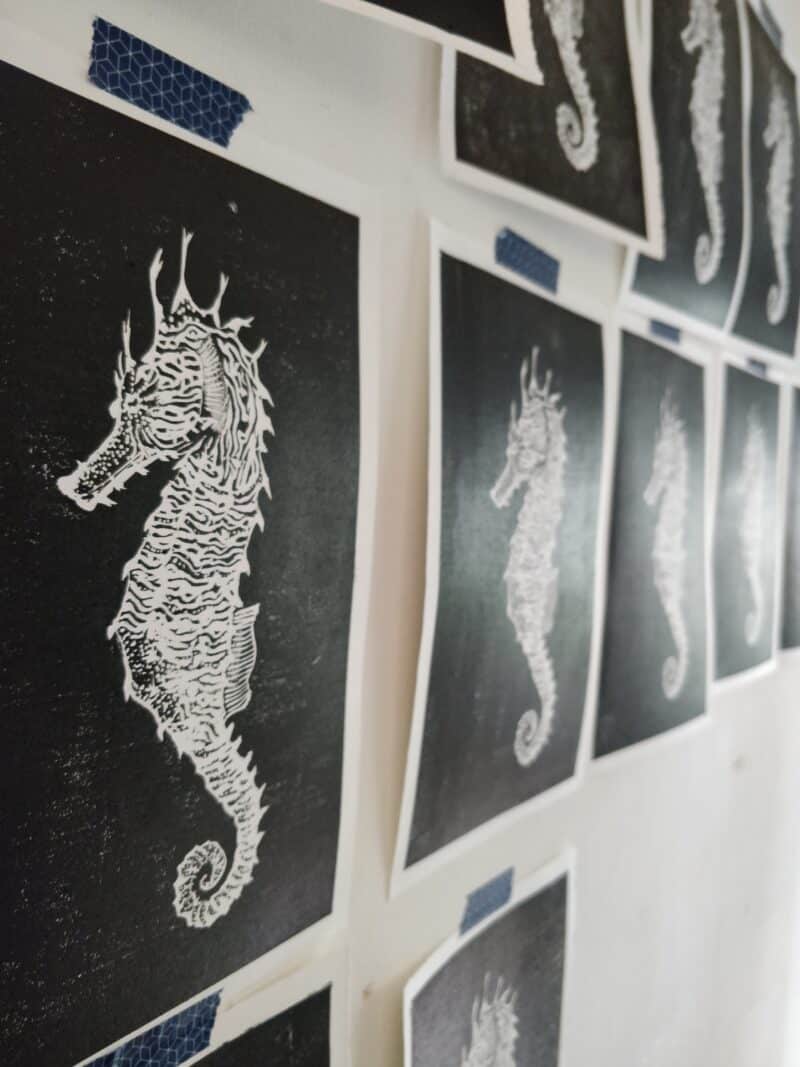 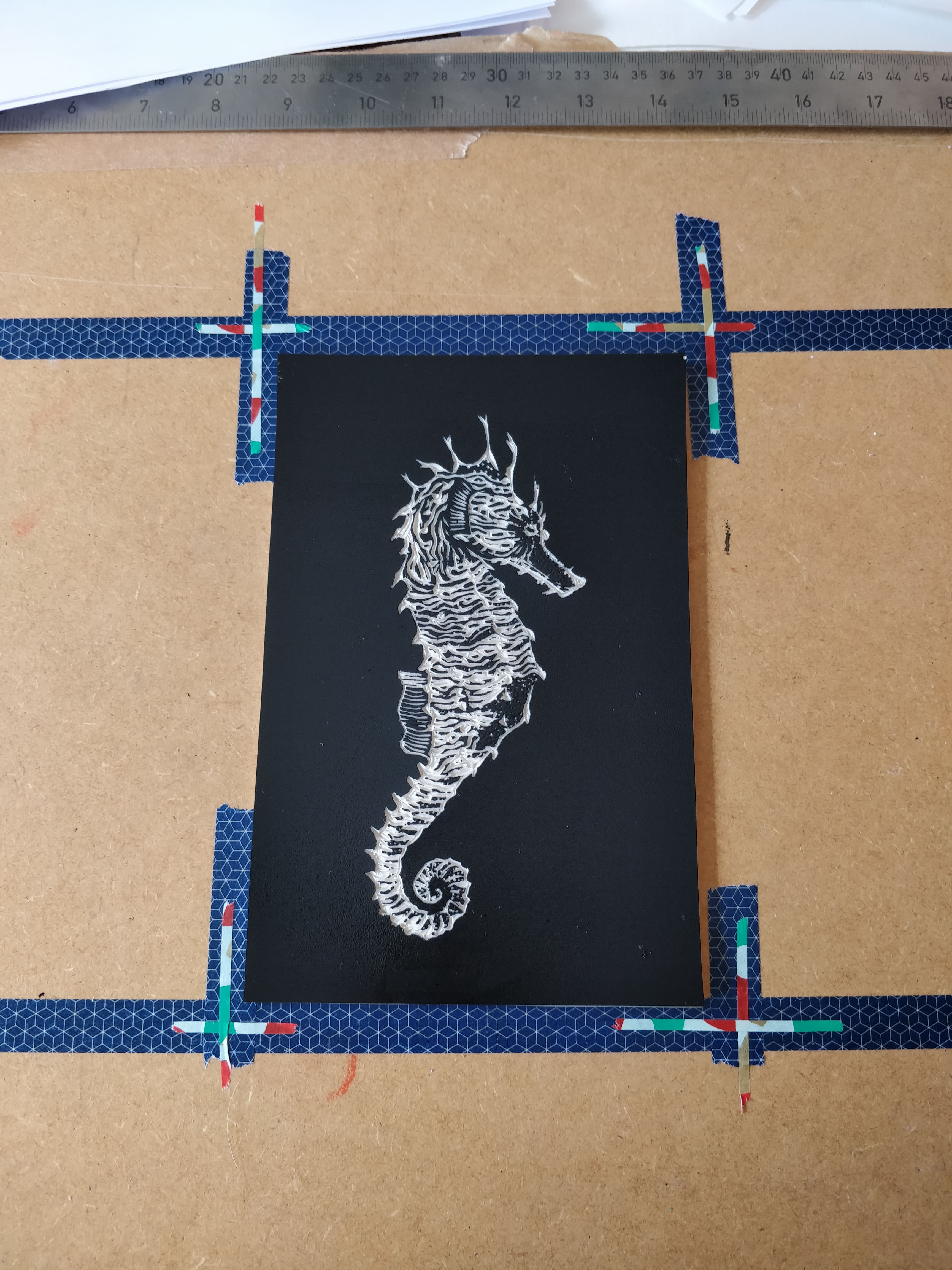 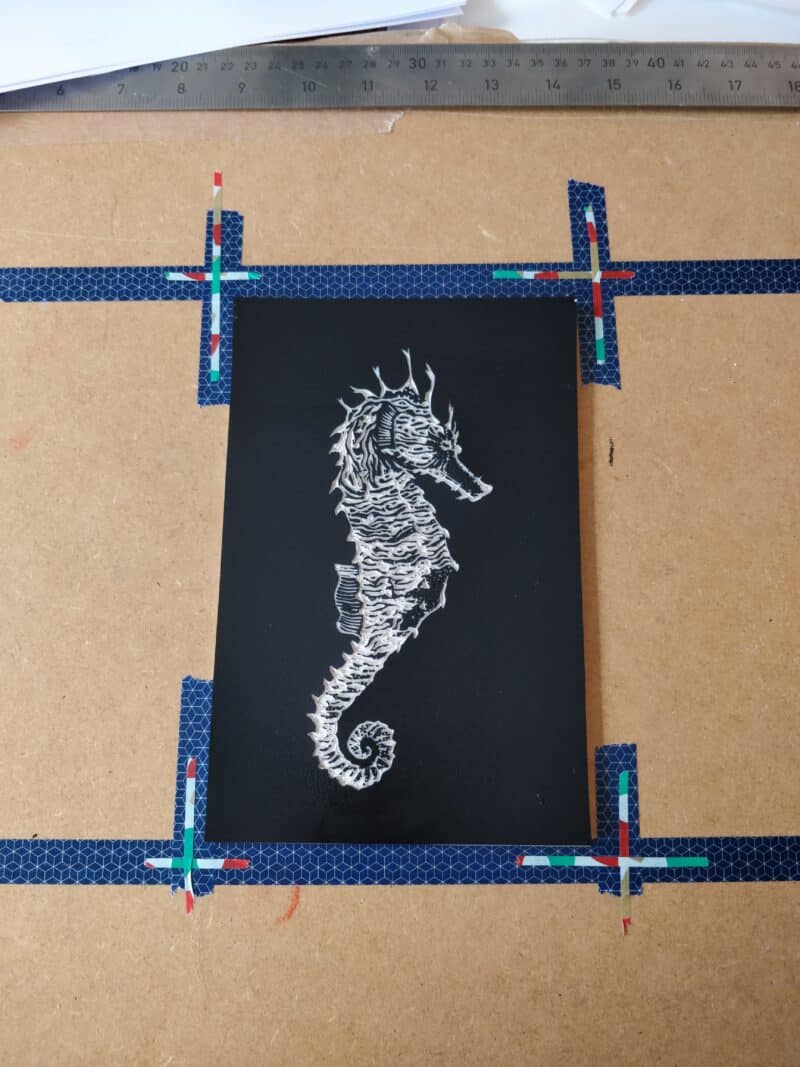 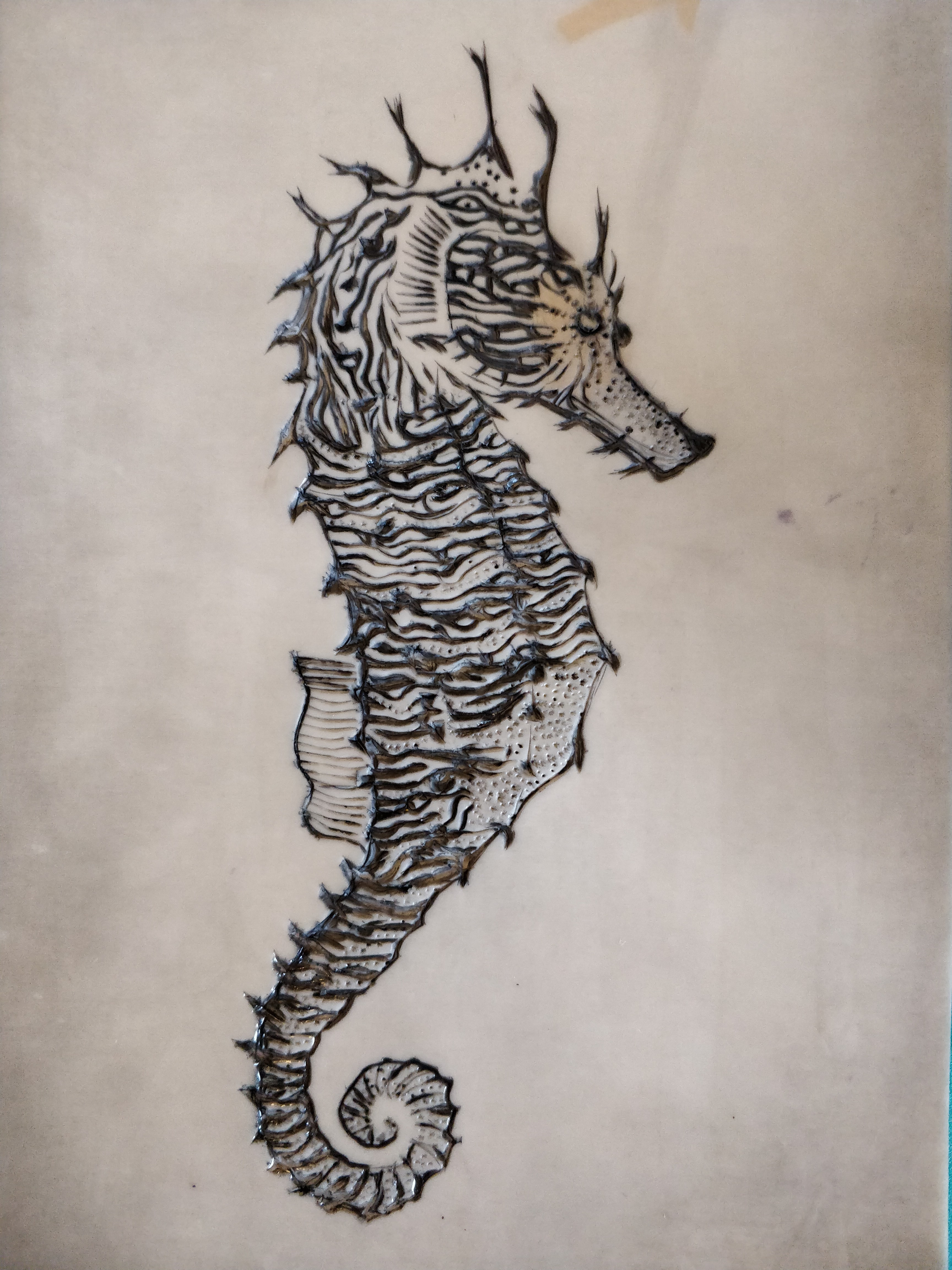 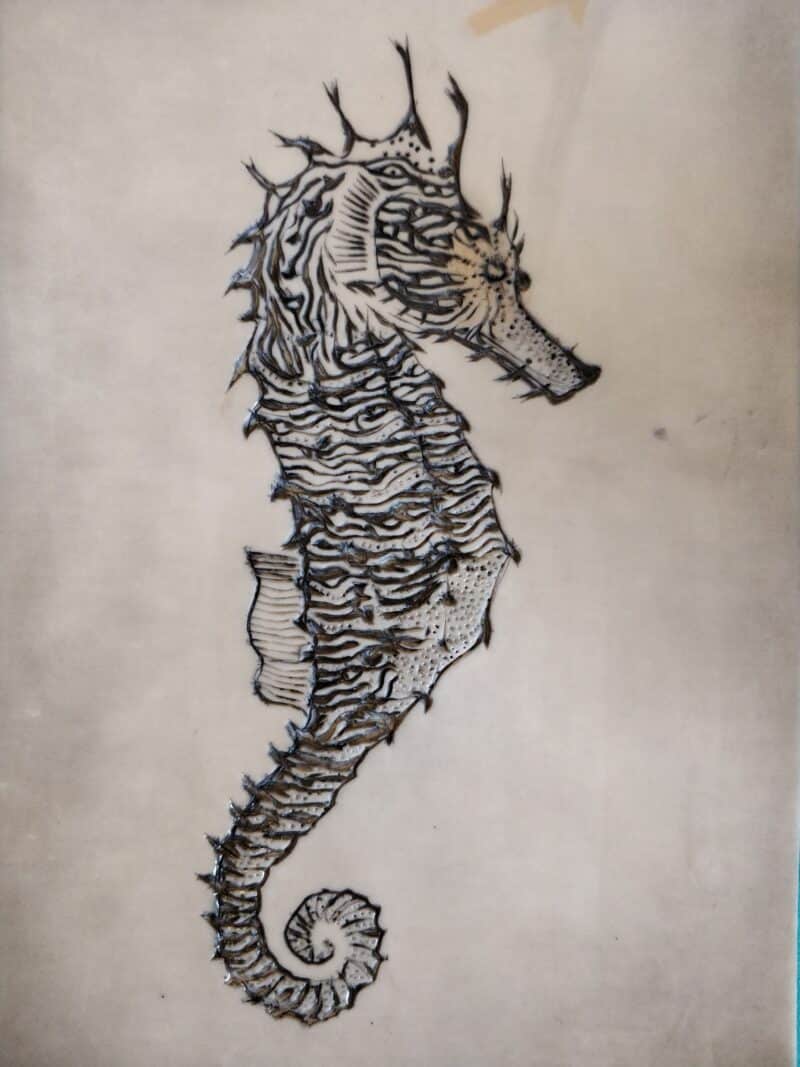 This is an original hand-pressed linocut print of the Lined Seahorse (Hippocampus erectus), illustrated by myself.

Every print is numbered, signed and dated. Due to the hand-printing process, each print has it’s own unique variations, so will not look exactly as the print pictured. If you’d like to see a photo of the exact print selected for you before buying, get in touch!

“The lined seahorse lives in the western Atlantic Ocean as far north as Canada and as far south as the Caribbean, Mexico, and Venezuela.

Lined seahorses feed mainly on minute crustaceans and brine shrimp, which they suck in through their snout. Since seahorses are weak swimmers, they must ambush their prey by blending into their surroundings, which they do rather easily. The lined seahorse’s eyes can move independently of one another, allowing it to effectively scan its surroundings. The lined seahorse is monogamous and performs ritual dances every morning to reestablish the bond with its mate. In addition, they create clicking sounds while embracing their partner. This action occurs when they initially find their mate. The intensity of their bond is also conveyed in how they handle the death of their partner: If either the male or female should die, the mate does not automatically replace the deceased mate with a new one. Often, it fails to find a new mate in its short lifespan.

In addition to monogamy, the lined seahorse also cues into sound-making in the mating process. The seahorses have a crown-like bony crest called a coronet located on the backside of their head at the edge of the skull. Each coronet is unique to the organism, just as a fingerprint is unique to every human. The coronet resembles a star pattern and is attached rather loosely and has sharp edges. As the seahorse lifts its head, the edge of the skull slides beneath the coronet and out when the seahorse bows its head. As the skull’s edge slides beneath and out from the coronet, a clicking sound is produced. Mating seahorses swim slowly together, alternating their clicking sounds, until they embrace one another. Once the male and female seahorse embrace, the sounds from both the male and female unify, becoming indistinguishable from one another. This action creates a louder, consecutive sound, further establishing their bond.

Like with other seahorses, the male lined seahorse is the caregiver. During intercourse, the female sprays her eggs into the male’s brood pouch where the eggs will incubate for 20–21 days. When the juveniles are ready to hatch, the male attaches its tail to a stationary structure and begins to arch its back, back and forth, releasing the juveniles into the water column. The juveniles are approximately 11 mm at birth. They quickly begin to learn and mimic the behavior of its parent. Courtship between the male and female parents begin immediately after birth.

The habitat of the lined seahorse is diminishing due to coastal growth and pollution, which ultimately is the cause of the decreasing population. The lined seahorse is also used as Chinese medicine and is common in the aquarium trade, contributing to its “vulnerable” status.”

There are no reviews yet.

Be the first to review “Lined Seahorse